Lowick is just a couple of miles from the coast and Harry`s "patch" included Holy Island (Lindisfarne) which is connected to the mainland by a causeway which is flooded twice daily by the rising tide. 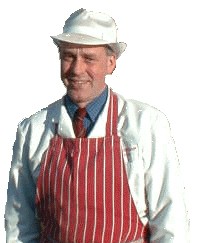 When the tide permitted, Harry would take his horse and cart across the causeway to serve the inhabitants of the Island, and then visit one of the island`s pubs for the odd drink or two.

One day, after having had more than a few drinks, he mounted his cart and headed back towards the causeway, ignoring the islanders` warnings that he would never beat the rising tide.

They were right: neither Harry Foreman nor his cart were ever seen again, presumbably having been swept off the causeway and out into the cold North Sea.

The Norham business continued to flourish, however, and in 1918 it acquired its first motorised vehicle. In those days of less reliable engines the van was always manned by two, in case of breakdowns, but the introduction of this vehicle allowed the firm to serve customers within a 15 mile radius of Norham.

As the years went by, the business grew and added more vehicles, covering an even greater area. By the late seventies, however, changing shopping habits and growing car ownership resulted in one of the fleet of three vans being disposed of.

In 1992 another van was sold, leaving the firm with just the one vehicle covering much the same area as that served by the first van in 1918.

Despite the changing shopping trends, the business itself continued to prosper, acquiring a shop in the fishing port of Eyemouth on the Scottish coast in 1972. That shop has been particularly successful and its position in that community was strengthened by the closure in 1997 of its main competitor.

A shop in Berwick-upon-Tweed`s woolmarket was acquired in 1979 and was a great success, with staff working hard to cope with queues of eager customers. The relocation of the adjacent Post Office in 1996 had an impact on the level of business, confirming just how important a good location is to the success of any shop.

The centre of the business remains the Norham shop which has been expanded steadily over the past twenty years, with a workshop which meets all current EC standards. A constant Hazard Analyis Scheme is in place, and all goods are thoroughly checked on arrival and prior to delivery.

There are seven staff working at Norham, preparing everything from pies and bakery produce to haggis, sausage, black pudding, curries, sweet and sour dishes and, of course, preparing all the locally-sourced meat for the customer.